First, I will show this video, News Link:

Below are two dice--one red and one white. 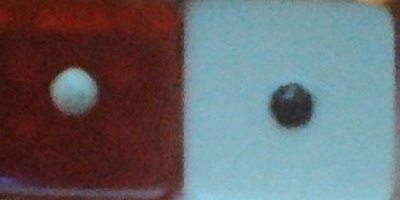 They are both on the # 1. This is significant because of this particular case's facets of possible guilt or innocence. I have been eying this case for awhile now. Bill Cosby has made himself out to be a bad character because his deposition looks and sounds like he can't control himself in the sexual sense. Now, the plaintiff in the case isn't much better with her testimony. Personally I can see a hung jury or an acquittal seeing as they are both really bad looking in court.

In the game of Risk, this is the same because of the fact that rolling a 1 is usually death to your army. However if you and your opponent roll a 1 (or any number that's the same for that matter), then the tie goes to the defense.

God will be the ultimate judge: the scriptures are clear.

Psa 67:4 Let the nations rejoice and sing for joy, because you judge people with fairness and you govern the people of the earth. Interlude.

Ecc 3:17 I told myself, "God will judge both the righteous and the wicked, because there is a time set to judge every event and every work."

Rom 2:6 For he will repay everyone according to what that person has done:

Rom 2:7 eternal life to those who strive for glory, honor, and immortality by patiently doing good;

Rom 2:8 but wrath and fury for those who in their selfish pride refuse to believe the truth and practice wickedness instead.

Rom 2:9 There will be suffering and anguish for every human being who practices doing evil, for Jews first and for Greeks as well.

Rom 2:10 But there will be glory, honor, and peace for everyone who practices doing good, initially for Jews but also for Greeks as well,

Rom 2:11 because God does not show partiality.

Rom 2:13 For it is not merely those who hear the Law who are righteous in God's sight. No, it is those who follow the Law, who will be justified.

Rom 2:14 For whenever gentiles, who do not possess the Law, do instinctively what the Law requires, they are a law to themselves, even though they do not have the Law.

Rom 2:15 They show that what the Law requires is written in their hearts, a fact to which their own consciences testify, and their thoughts will either accuse or excuse them

Rom 2:16 on that day when God, through Jesus the Messiah, will judge people's secrets according to my gospel.

Rom 2:17 Now if you call yourself a Jew, and rely on the Law, and boast about God,

Rom 2:18 and know his will, and approve of what is best because you have been instructed in the Law;

Rom 2:19 and if you are convinced that you are a guide for the blind, a light to those in darkness,

Rom 2:20 an instructor of ignorant people, and a teacher of infants because you have the full content of knowledge and truth in the Law

Rom 2:21 as you teach others, do you fail to teach yourself? As you preach against stealing, do you steal?

Rom 2:22 As you forbid adultery, do you commit adultery? As you abhor idols, do you rob temples?

Rom 2:23 As you boast about the Law, do you dishonor God by breaking the Law?

These two will be judged like everyone else by God with or without a verdict here. God knows all of the facts and we don't. Mr. Cosby has proven very possibly a bad role model after talking about and being wholesome on TV. This is dangerous. Like I said though, Mr. Cosby's accuser may not be that much different and therefore no one except God knows which one (if either) is worse). Like Risk, our judicial system likely will find reasonable doubt because these two are not good for role modeling most likely, but God knows who to blame--either or both and will judge accordingly. These two need to earnestly seek Jesus and repent of any sexual sins, like we all need to do in any case. None of us are perfect and none of us are righteous without the One that saves.

The Bible says this:

Rom 3:10 As it is written, "Not even one person is righteous.

All of us need to Remember.

There was indeed a mistrial in this case that was called by the judge presiding over it because the jury was deadlocked on June 17, 2017. The prosecutors say they will retry the case as of the date that this is written; we need to understand though that if the same evidence is used, then likely the same result will happen.